skip to main | skip to sidebar

Where has Oprah Taken Us? By Stephen Mansfield 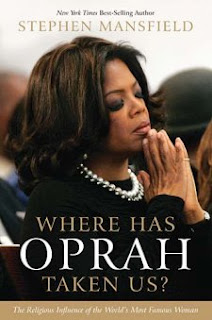 This book delves into the many influences that have brought Oprah to where she is today. It is very insightful and thorough. I found most of the information intriguing but got bogged down with so much information. She has so many influences and personalities in her life that it is no wonder she has such conflicting and confusing beliefs.

The author presents the material in an easily readable way and the book is divided to make it easy to skip around and read about the individual people and their beliefs. It is divided into four main sections, the first two being the biography of her life, the third the biographies of the people who have so greatly influenced her and the last is about her philosophy and religion as it is today.

Although, I have never held any regard for Oprah or been interested in her life, I was interested in learning about the people and their beliefs that have caused her to adopt so many belief systems. I learned about many influential people, what they believe and their relationship with Oprah; what I think is important to know in order to understand the many ideas floating around that people are putting their faith in. I also learned a little about Oprah’s life and can applaud her tenacity and hard work to get where she is today although it came at the expense of others.

This is an insightful and informative read.
Posted by Cheryl Dietz at 8:57 AM No comments:

Germany and Austria, a perspective

Since I feel an obligation to the few people who follow my blog and linked my page to theirs, here is a post.

I have lived in Europe now for almost 6 years. The first 5 years were spent in Dresden, Germany. What was the former East Germany. It is a unique experience, even from those who live in west Germany and other parts of Europe that were not under communism. Since July of 2011, I have lived in Graz, Austria. I knew moving here would produce some culture shock, maybe even more than our initial move to Germany, but although I have had some shock, I have not had as much as I thought I might. I thought I would share a few major differences that I have seen and felt.

Seeing as Austrians speak German (albeit a "funny" version) and that it neighbors Germany and the cultures are very similar, the two are also rather different.

German cuisine comes from Austria, so the food tends to be better here. Graz is known for its apple dishes and pumpkin seed oil. The Austrians also have a whole different vocabulary for their fruits and vegetables. Apricots, cherries, and several other berries are just an example. Their bakery goods are also quite different than what you find in Dresden. Most are actually much better here, and they tend to taste as good as they look. (This is a problem in Dresden, most don't taste near as good as they look!) In Germany, every region has their own potato salad, but sadly, potato salad is hard to find here. The Kase krainer is the Austrian sausage, and it is really good (think somewhat spicy sausage with cheese inside).

The schooling is also quite different. I think here, the kids have about 4 days of school and one day of fun! Seriously though, during the winter, Logan's 1st grade class went ice skating 3 times and the whole school had a day to sled down the hill outside the school. The other day, any child who wished to participate in the state ski races boarded a bus and spent the day snowboarding and skiing. Our boys went to school and did ? with a substitute teacher. The older two kids had ski trips for an entire week (7 days). Neither kid participated and were supposed to attend classes with either the other 5 kids that didn't go, or in the case of Ashlyn, go down a grade and do class with the 5th graders. The following week, Ashlyn's class had an "English" week (again she didn't participate) in which the kids were taught English by native english speakers from Great Britain. The week cost over 100 Euros and the ski trips were about 300 Euros per kid. The schools seem much more relaxed here versus Dresden and the kids get 8 weeks of summer, 2 weeks more than Germany.

Shopping is also a little different. First, everything is more expensive. In the stores, the price tags will have the German price first, since it's cheaper, and then the other EU countries after. Austria is always at least 50 cents more. Food is also more expensive. I actually could find more American products in Dresden and am missing some things here, like cream of mushroom in a can (I have to buy the powdered soup and add milk and corn starch to thicken it up) and refried beans. (It's the small things!) But, I can get chocolate syrup and lots of different fruity, carbonated drinks unavailable in Dresden. I will be glad to get the things again when I get back to Dresden, but will sure miss the drinks here. I may have to have people bring them up when they visit!!!

That is quite enough to bore you by now. I have to go figure out how to adapt some of those good looking recipes from America for use with the products I can get here. If you made it this far, hope you enjoyed the peek into just some of the differences. I will write more about the cultural changes soon. Thanks
Posted by Cheryl Dietz at 3:57 PM 2 comments: 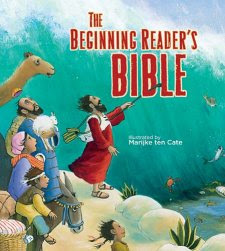 This is a rather large children’s Bible designed for young children with a selection of stories from both the Old and New Testaments. I like that it uses an easy translation of the Bible to tell the stories rather than paraphrasing or simply retelling the story. Although, using scripture makes it more difficult for those children wanting to read it for themselves. The illustrations are nice but not the best I have seen.

There is a good representation of the most popular and significant stories from both the old and new testaments, beginning with creation and ending with a simple depiction of Heaven from Revelation. The Bible also has several other features typically found in the newer children’s Bibles, such as memory verses and simple projects to apply the lesson. Another feature I like is “Pray God’s Word”. With each story, they have a scripture to be used to pray pertaining to the lesson of the story. I think many Christians today have difficulty praying God’s word and so I think this feature is a gem! In the back of the book are lyrics for several songs, several famous passages from the Bible (like the 23 Psalm) and several lists, like the tribes of Israel, and the ten commandments. It also has a reading checklist and a memory verse list. It also includes a prayer of salvation.

One major flaw is the lack of page numbers. It has a table of contents including page numbers, but none of the actual pages have a number, so one must count as they turn the pages. I find this rather comical and annoying. I think this Bible has a limited life, it is too large and easy to tear for the real young, too big and bulky to be taken to church, and too simple for a child that is beyond a beginning reader. I would want a complete Bible for my child once he is old enough to understand the Word and read beyond the beginning level. The Bible is good for what I was looking for: a Bible for my 5-6 year old that he could look at and enjoy till he is ready for a real Bible. He may even be able to read it soon.

Posted by Cheryl Dietz at 8:37 PM No comments:

We have been here in Austria now for about 8 weeks. I anticipated culture shock and thought it might even be worse than our initial culture shock when we came to Germany. I haven't found the culture shock that bad, less than I expected, but I have noted quite a few cultural differences. Since I am not much of a writer, I think I will list them rather than wax eloquent. So here goes:

1. Shopping:
a. There is a better selection of water drinks, but much fewer yogurt options.
b. Stores are only open till 7 or 7:30 pm ( a few) on weeknights and 6 pm on
Saturdays. Everything is closed on Sundays (like Germany).
c. I can find some things here that I could only get in Prague and I can't find some
things I could easily find in Dresden. We will be doing without several things we
had grown to enjoy.
d. There are only two prepaid cell phone options here and they aren't particularly
cheap. I had MANY options in Dresden.
e. Everything tends to be more expensive here.
2. The accent and dialect Austrians use is difficult for me to understand sometimes.
I had just trained my ear to the Saxon dialect and accent and now I am rather clueless.
3. The food here is better. Graz is the culinary capital of Austria. German food comes from
the Austrian and they use pumpkin seeds and pumpkin seed oil here and it is delicious!
This area is also known for their apple dishes, much to Jason's delight.
4. Austria is a Catholic country and we lived in the "Lutheran" area of Germany so the
many crucifixes and small chapels and memorials everywhere is strange to us. The
boys also go to a Catholic school, so they must attend Chapel weekly and the Priest
blessed each child today on their way out of the Church after the 1st grade program.

That is all I can think of at this moment. I hope to be able to write more often with thoughts and observations.
Posted by Cheryl Dietz at 2:27 PM 1 comment:

More things to Love about Dresden

Dresden is a growing city. This is unusual for eastern Germany. For 2 decades now, people have been "fleeing" eastern Germany for the west, where they can find jobs. Despite Dresden's high unemployment, they have been experiencing a baby boom and growth. I find this exciting for many reasons. (I will expound on this but with no particular order.)
First, more German families are having 2-3 kids and I know a family that is expecting their fourth! This helps our family to blend in better (I hate to standout!).

Second, it means that there are more potential friends for us, our kids and more people with whom to share the Good News. It also means new members to the church and potential co-laborers.

Thirdly, and certainly not the most important, growth also gives us shopping! Last year, our previously strip mall style shopping area with an Ikea and Toys R Us remodeled to make it larger and is now a traditional American style mall. Then, last October, a new mall opened up with a Starbucks, KFC and a great store with everything, Mueller. Then another Starbucks opened on the Old Town square. Now, a new section to the main downtown mall has added on an additional 98 stores including an Apple store and this store: 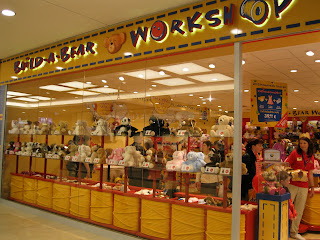 I have never really enjoyed shopping in Europe for many reasons but as we get new stores and I discover more gems, I have begun to enjoy it more. With all these new stores and malls, I am going to really miss Dresden this next year. And, now there are fewer reasons to need to shop on our stateside trips.
Posted by Cheryl Dietz at 9:45 AM 1 comment:

Cheryl Dietz
I am a wife and mother of four ages 9-16. I have been married for 19 years. I am still trying to figure it all out. Life is often crazy but never boring!